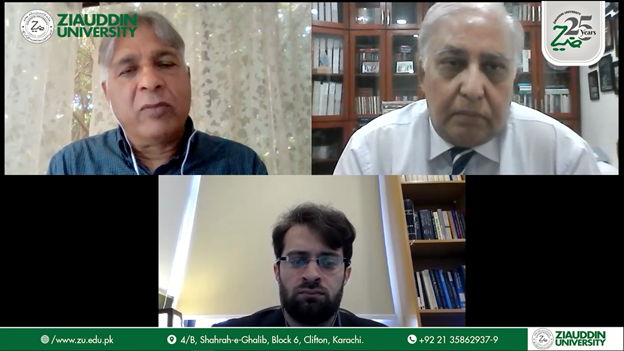 “Jinnah’s Vision of Pakistan: You are free to go to your temples…”

Ziauddin University organized the 6th interactive series of “ZU Dialogues”, titled “Jinnah’s Vision of Pakistan: You are free to go to your temples…” to get an opinion and analysis of the experts about Quaid-e-Azam Muhammad Ali Jinnah’s vision, religious freedom, democracy, equality, rights of minorities, social and cultural differences among ethnicities.

While talking about the historical context of Quaid-e-Azam Muhammad Ali Jinnah’s Presidential Address to the first Constituent Assembly on 11 August, 1947 panelists said that Quaid gave a vision of future Pakistan. The main crux of his speech was that why India partitioned and at that point he cleared that because of angularities of minority and majority we partitioned. There is an example of the sub-continent where we failed to build as a nation and then we have Pakistan where apart from majority and minority we all have equal rights and opportunities to grow further as a nation. Jinnah’s vision of Pakistan was a vision of a modern democratic state where parliament should be sovereign.”

Using the lens of famous landmark judgement delivered by chief justice Tasaduq Hussain Jilani in 2014,  speakers added “it’s been 7 years and  2 governments  have completed their tenure  and  yet failed to work on the implementation of the Jilani judgement to setup a special task force for social and  religious harmony, to make education for  promoting peace, to setup task force for the protection of minority’s worship places, establishing a national minorities commission (to have a say in policy making). Even after having 20 hearings by the supreme court and 60 court orders. Neither a single cabinet meeting has been called nor a parliament has discussed this judgement. They all seem to be so reluctant to those orders of the supreme court.”