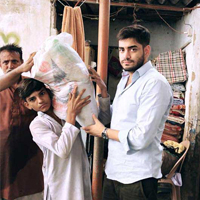 In the holy month of Ramadan, students from the various colleges of Ziauddin University set forth to give back to the community. Three different societies organized one event each. All the events were undeniably successful and endorsed a heightened sense of empathy and compassion for those less fortunate.

The students from Ziauddin College of Rehabilitation Sciences distributed iftar packages to all the people on the roads of Ayesha Manzil at iftar time.

The annual Ziauddin Literary and Cultural Society Iftarnival was held on 2nd June at Dar-ul-Sukoon’s home for senior citizens. Many of the university students volunteered and helped with the distribution of iftari. They actively interacted with the residents of the home also. An activity segment was scheduled as well in which everyone showcased their talents. Along with the iftari, gift bags were also distributed which contained items essential for basic hygiene like toothbrushes, toothpaste and soaps. The passionate and dedicated volunteers, not only contributed with food items but also ensured the residents had a memorable, fun-filled evening.

During the Holy month of Ramadan Welfare AID was able to distribute a months worth of ration to 80 deserving families of Gulshan e Sikandarabad.

On the 7th of June, students gathered under the banner of Welfare AID, in the premises of Ziauddin Hospital, Kemari Campus to distribute Iftar boxes to the 150 staff members. There was a contagious excitement in the air as students worked hard to serve Iftar and give back to the people who had supported them all year long. A small token of appreciation for their tireless efforts.

Contrary to what many may believe, Ramadan is not just a month of fasting and abstinence but also a month of celebration. You celebrate the act of helping others and what a great feeling it is. It serves to bring people from all walks of life together, which is precisely what Welfare AID hoped to achieve through this event.

Lastly, Rah-e-Naiki decided to visit Musa colony and distribute Eid gifts. They catered to the widows, children, orphans, elderly people and others that reside in the area, in an effort to allow them to indulge in Eid festivities in the way that they deserved. While they initially faced hurdles in collecting donations, they raised a respectable Rs. 126,000 which was used to prepare 150 Eid gift bags with clothes and ornaments and 100 envelopes of Eidi.

While concerns were raised about security in Musa Colony, the volunteers were given a warm welcome by the residents who were extremely cooperative and friendly, culminating in a joyous occasion for all.

These projects were a major milestone due to the hard work of the organisers, and the immense support of the university students and faculty members, especially the Department of Student Affairs. These projects influenced lives positively and helped the students become more understanding about the problems of the underprivileged people.

Ziauddin University hopes to continue this chain of giving back to those who need it most, whether it is in the form of gifts, money, food or simply providing our presence.