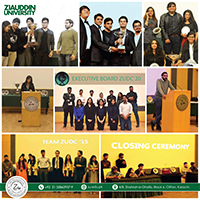 For its eleventh year, Ziauddin University is hosting students from all over the country to exhibit their oratorical skills and showcase diverse skills like the use of, rhetoric, emphasis etc. to convince the audience. At ZUDC, participants are expected to spar with arguments for the motion and some against the motion adequately equipped with statistics and data validated.

Debate for centuries, has been a way to express the innermost workings of individuals. As said by Robert Heinlein:

“You can sway a thousand men by appealing to their prejudices quicker than you can convince one man by logic.”

With the event lead by President Eeman Mir and Chief Adjudicator, Humza Jami, ZUDC 2020 is headed to a great start!