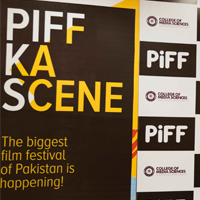 Ziauddin College of Media Sciences was privileged to provide PIFF with a platform to promote Pakistani cinema and filmmakers by creating an interactive space for open dialogue and exchange of ideas that will help Pakistani cinema find its groove again in the post-revival age. PIFF has become the first large-scale film festival in its time and has brought bunch of international film-makers, actors and artists to Karachi to celebrate cinema, interact with members of the Pakistani entertainment industry and exchange stories and ideas.

ZCOMS has always been proud in being a part of such progressive events where Pakistan can be promoted in whatsoever manner. Therefore, ZCOMS feels honored to host the leading film festival, Pakistan Film Festival’s very first edition and will be glad to continue being a part of such initiatives in the coming years.