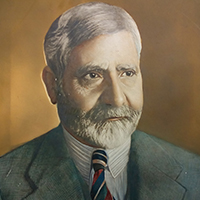 Before Partition when the situation in the subcontinent was worsening and Muslims were going through serious trauma during riots, some leaders decided to help those people. They started taking initiatives for the betterment of their nation and stood up for them. Prominent among them were Sir Syed Ahmed Khan, Quaid-e-Azam Muhammad Ali Jinnah, Allama Iqbal, Liaquat Ali Khan and Fatima Jinnah. Another notable personality of the time was Sir Dr Ziauddin Ahmed, who also played an important role and reached out to the Muslim community.

Dr Ahmed was a renowned educationist and seasoned politician. He was born on February 13, 1878, in Meerut, India. He completed his primary education at a madrasa. At the age of 17 he joined Muhammadan Anglo-Oriental College, Aligarh, and completed his BA in mathematics with distinction. He was the first Muslim to obtain a DSc (Mathematics) from the Allahabad University. After completing DSc, he decided to go abroad for further studies. Dr Ahmed took admission to the Trinity College at the Cambridge University for getting an honors degree in mathematics in 1903 and became the first one from the subcontinent who earned the Sir Isaac Newton scholarship. He had a thirst for education that took him to the Gottingen University, Germany, where he completed his PhD in mathematics in 1906.

After the death of Sir Syed Ahmed Khan, Sir Dr Ziauddin Ahmed played an important role in the renewal of education for the Muslims. He worked a lot for education and made it liberal.

After Sir Syed, Dr Ahmed was the one who took the initiative of helping the Muslims in the education sector. He wanted to promote modern education. He was the one who raised the educational standards of the Muslims and promoted literacy among them. He remained associated with the Aligarh University for more than half a century. He was the founder of many new colleges at the university. It was his dream to set up a medical college at the university, but unfortunately financially it wasn’t possible for him to do that alone, so he decided to collect donations. For this purpose, he started a regular campaign and collected about 4.4 million rupees.

Aligarh was the very first university in the subcontinent where students were not only motivated but they also prepared to join the armed forces. Sir Ziauddin Ahmed helped students in joining the military and it was due to his hard work that a number of students from the Aligarh University joined the armed forces as commissioned officers and proved themselves an asset to their country. During the Khilafat Movement and the Non-Cooperation Movement, modern education and the Aligarh University were criticised, but Sir Dr Ziauddin Ahmed stood for the safety of the university. He was a very competent administrator, skilled in budgetary matters and was an elected parliamentarian. He proved himself to be a great politician too by fighting for the rights of the Muslims.

He was a trustworthy lieutenant and colleague of leaders like Sir Syed Ahmad Khan, Nawab Viqar-ul-Mulk , Nawab Mohsinul Malik, Sir Sultan Ahmed Khan, Aga Khan and Syedna Tahir Saifuddin. He was very close to Sir Syed Ahmed Khan, and his association with him made him the embodiment of dignity and excellence. He also presented the cause of the Muslims in the central assembly of the undivided India.

Sir Dr Ziauddin Ahmed was considered an expert in the fields of mathematics and economics; hence, he was much appreciated for his contribution as a member of the central assembly. He was a great benefactor of the Muslims and left an indelible mark on our education system and we owe him a great debt.

Even after more than 70 years of independence, our educational system is not in a good condition. The question arises: why can’t we find educationists like Dr Ahmed and Sir Syed Ahmed Khan today?

We must accept this reality that the courses we are teaching our students don’t have complete history of our past, and our youths do not have any idea about our great leaders. We have not been able to modernise our educational system according to our religious, ideological and socio-economic needs because we have corruption at its peak in our educational sector.

Pakistan is facing a lot of problems in the domain of education because of incompetence and lack of concern on the part of the government. Unfortunately, we have poor educational policies. There is no objective to achieve anything good.

Now when we are in the 21st century, we definitely need to review our education system. We should take some concrete steps to improve the standards of education and bring it at par with international standards so that our students prefer to get educated inside Pakistan rather than going abroad. We really want our youth to stay in our country and serve it. This is only possible if our leaders work like our heroes, Sir Syed Ahmed Khan and Sir Dr Ziauddin Ahmed.

Published in The News